The experience at the Interactive Aquarium Cancún begins with the observation of our variety of fish species, from both freshwater and saltwater. The fish tank area has 1,195 specimens of approximately 140 different species. Here are some of them and native Cancun fish species. 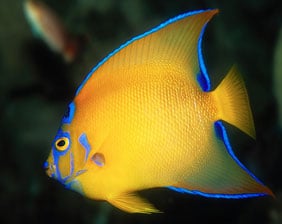 The queen angelfish is one of the most representative species of the Caribbean due to its bright colors.

It generally lives near reefs and is not migratory, it is usually found in pairs but can also be a solitary fish.

Fun Fact: It is called Queen Angelfish because it has a blue ring with a black spot on its head that looks like a crown. 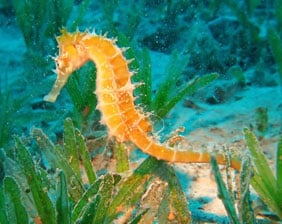 Its name comes from the peculiar resemblance between its head and that of a horse.

Its body and tail are covered with concentric rings of bone. In fact, its ability to position its head in a straight angle is not found in any other kind of fish.

Given their unusual shape, it is hard to believe that seahorses are fish.

They live in shallow tropical and temperate waters around the world.

Fun Fact: It is the only species of the animal kingdom where the male incubates the eggs until they hatch. 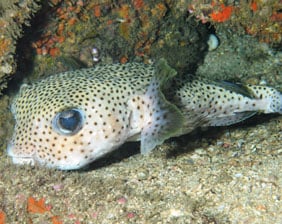 This fish is found near coral reefs where it lives at a depth of 2 to 50 meters and can measure up to 91 centimeters long.

It has a defense system against predators which consists of inflating its body and drawing out its thorns, making it impossible to swallow, but as long as it does not feel in danger, its quills remain attached to the body.

Size: It grows up to 40 cm, on average, but can reach up to 91 cm without inflating its body.

Fun Fact: The blowfish has a poison called tetrodotoxin, a powerful defense weapon against predators. 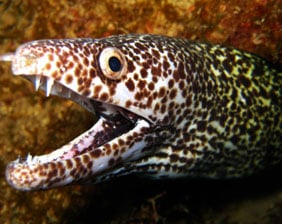 The most significant thing about this species is its color. It is nocturnal which is why it is hidden most of the time; it feeds on fish and crustaceans.

They are solitary and calm animals and only attack the human being if they feel threatened. However, they have a very dangerous bite.

They are found along the coasts of the western Atlantic, between North Carolina (USA) and Bermuda to Brazil, including the Gulf of Mexico and the Caribbean Sea.

Size: Its average size is 60 cm but it can measure up to 2 meters long.

Fun Fact: This fish has no scales and its body is covered with a gelatinous mucosa.

It is a fish created by man. It is wide and round with a deformity between its head and dorsal fin. It is not found in nature. Some people have irresponsibly released them in lakes without knowing the dangers they present to the ecosystem.

Its color varies from yellow to red, through all shades of orange. When they are young they have a greenish-grayish tone that fades over time.

Size: They can measure up to 30cm.

Fun Fact: The male is sterile but its behavior is completely normal, it will woo its partner, clean the spawning area and try to fertilize. 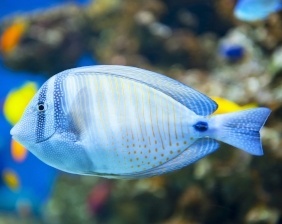 The coloration may vary from one individual to the other and within the same individual, depending on age. In general, the upper side of the body alternates orange and dark blue vertical bands, with a large blue band on the eyes, a spotted ventral region and numerous white spots on the head, and other yellowish fine lines.

It is related with coral reefs, frequently found in protected lagoons and outside reefs. Its depth range goes from 3 to more than 30 meters. Adults can usually be found in pairs, while juveniles are solitary and protect the corals. It is an agile and elegant swimmer, sociable with most of the inhabitants of the reef, except the territorial males of its own species. It inhabits the reefs.

Did you know that?: They suffer from sexual dimorphism, and the males size is bigger than that of the females. 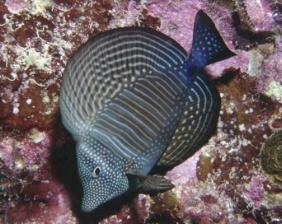 The distinguish from the rest of the surgeon fish for having, at least, three scalpel-like-spines at every side of the caudal peduncle to defend themselves.

This species dwell in reef -associated areas at depths ranging from 1 - 50 m, in a temperature range between 20.79 and 27.48ºC. It is found mainly in tropical and subtropical waters of the Pacific Ocean.

Their depth is of 50 meters.

Did you know that?: It has al least three defensive scalpel-like-spines. 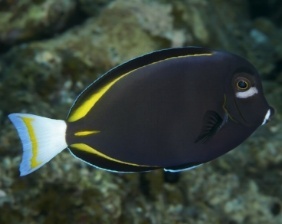 It is a territorial and benthopelagic species. It is associated to coral reefs. They dwell in solitary and in small groups.

With respect to its reproduction, females are bigger. They are monogamous, oviparous and of external fertilization. They do not take care of their off springs. Their eggs are pelagic,1 mm in diameter and contain a drop of oil to facilitate its buoyancy. In 24 hours, the eggs hatch translucent pelagic larvae.

It dwells in the Indian Pacific Ocean. It is a native species of Australia and it can also be seen in the Mexican Coastal Areas. 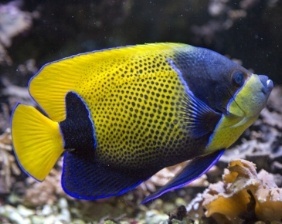 Their fertilization is external, spawning once a year according to the weather station. They do not take care of their juvenile or baby fish.

They are found in the Indo-Pacific Ocean. It is a native species from Australia, the Philippines, Indonesia, Malaysia, Micronesia, New Caledonia, Palau, Papua New Guinea, Salomon Islands and Vietnam.

It is a non migratory reef species. It is found between 3 and 40 m in depth. It lives in outside reefs, canals, lagoons and often in areas rich in coral. It is found single or in pairs.

Did you know that?: They are sequential hermaphrodite which means that if a male dies, one of the females of the school of fish becomes a male.: Se alimenta principalmente de esponjas. 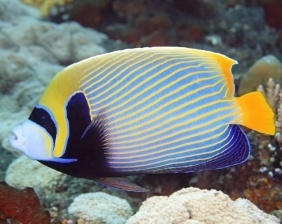 It is outstanding for its unique brilliant pattern of coloration and its notable transformation from juvenile to adulthood, it is no migratory.

They dwell in reef-associated areas at depths ranging from 1 - 100 m in a wide variety of habitats that go from outer reefs to deep lagoons and often in areas of rich coral growth. It is frequent to find them in front holes and caves.

The juveniles move from holes to surge channels and shallow reefs. They are found all over the Indo Pacific Ocean.

This species is oviparous and the males have harems of 2 to 5 females. They are sequential hermaphrodite which means that if a male die, one of the females of the school of fish becomes a male. Their fertilization is external, spawning once a year according to the weather station. They do not take care of their juvenile or baby fish.

They spawn once a year.

Did you know that?: In this species the males have harems of 2 to 5 females. 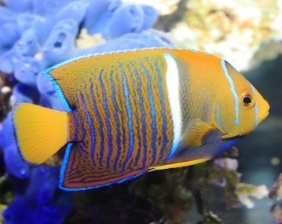 It is a species related to reefs and classified as non migratory. It is common in rocky reefs with crystal clear water. Is abundant in coralline bottoms, frequent in sandy substrates and more occasional in rocky bottoms. It lives at depths ranging from 4 to 30 meters.

Their distribution is in the Eastern Pacific Ocean, from de Gulf of California at the North and all the way up to Peru at the South. It is a native species in Colombia; Costa Rica; Ecuador (Galapagos); El Salvador; Guatemala; Honduras; Mexico; Nicaragua; Panama and Peru.

Diet: It is omnivorous and feeds mainly on sponges, tunicates, sea urchins, invertebrate eggs and several species of algae.

Size: Males are bigger than females, they measure up to 35.6 centimeters long, although the normal size in adults is of 15 cm.